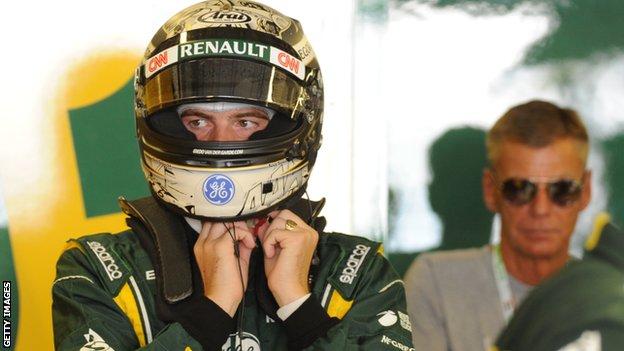 Caterham have promoted their reserve driver Giedo van der Garde to a full-time race seat in Formula 1 in 2013.

The decision effectively ends the F1 career of Finn Heikki Kovalainen, who had driven for Caterham, and its fore-runner Lotus Racing, since 2010.

"This is Giedo's opportunity to show he deserves his place at the highest level," said Caterham team principal Cyril Abiteboul.

"He and Charles have been team-mates before so he is an excellent choice to partner Charles in what is going to be another very interesting season, and we are all looking forward to seeing Giedo continue to progress as he takes on the ultimate challenge of F1."

Van der Garde, who won two races on his way to sixth in the GP2 feeder series last year, said: "I know I am ready to take the step up to F1 and all the work I have done throughout my career, and particularly in the last year with this team, has brought me to my ultimate goal.

"Throughout 2012 I was able to fully integrate myself into the team, both through the FP1 sessions I ran at a number of tracks that were then new to me, and as reserve driver, fully embedded with the team throughout the season.

"Now I can continue to learn at the highest level of motorsport and show that I am ready for F1. I cannot wait to start work."

In a sign of the times at the back of the grid in F1, both men owe their places at Caterham to their bringing substantial sponsorship to the team.

That is despite the team hanging on to 10th place in the constructors' championship for the third season in a row, a position they secured only at the last race of the season and which earned them an additional $11m (£6.9m).

Kovalainen joined Lotus from McLaren, where he won the 2008 Hungarian Grand Prix, but has not been able to secure a drive for this season.

Last month, Marussia ended the contract of German Timo Glock because they could not afford to pay him his salary and needed to take a pay driver instead.

That is expected to be Brazilian Luis Razia, who has said on his website that he will be driving for Marussia. The team have made no comment.