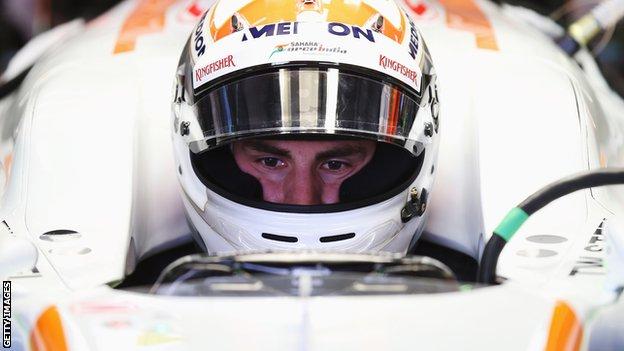 Adrian Sutil appears to have won the race for the final seat available in Formula 1 this season at Force India.

The 30-year-old was in competition with the team's reserve driver, Frenchman Jules Bianchi.

Bianchi's manager Nicolas Todt said on Wednesday he had not got the seat: "Jules Bianchi will not be Paul Di Resta's team-mate."

Force India, who embark on a final pre-season test on Thursday, said they were not yet in a position to comment.

"Force India need to get their driver in. They know Sutil will do a solid job but I would choose Bianchi.

"He's quick; he did the lap time in (the first pre-season test in) Jerez to show that; and I'm sure there is money in it from Ferrari for them as he's in their development programme.

"Sutil will do OK, but he was no better than Di Resta when they were team-mates in 2011, and that was Di Resta's rookie season."

Sutil drove for the team in their various guises from 2007-11 but did not race in F1 last year.

Force India replaced him with German compatriot Nico Hulkenberg in the midst of Sutil facing a criminal trial on charges of grievous bodily harm following an incident in a Chinese nightclub in March 2011.

The team denied the charges were the reason for him losing the drive.

Sutil was found guilty of assaulting Belgian Eric Lux, an executive with the Renault (now Lotus) team, and given an 18-month suspended prison sentence and 200,000 euro (£167,224; $264,092) fine in January 2012 after Lux was left needing stitches in a neck wound caused by a champagne glass.

Bianchi could continue as Force India's reserve driver, and is also a member of the Ferrari driver academy.

Todt, who also manages Ferrari driver Felipe Massa, said: "It's a big disappointment. I am a very realistic person but I was very hopeful he would get this drive.

"We are looking around in F1 but there are very few options."