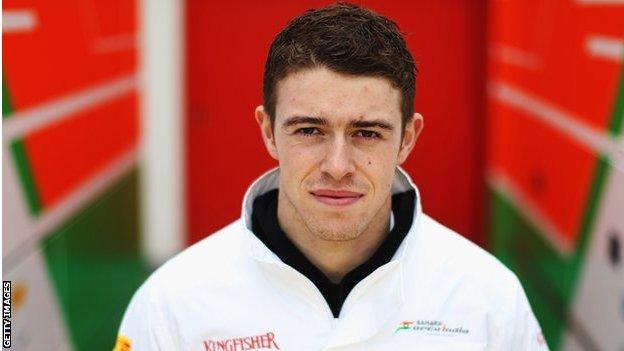 Scottish racer Di Resta and the Silverstone-based marque have both made their best start to a year.

The 27-year-old has chalked up 20 points in the first four races and the team has 26 in total.

Force India team-mate Adrian Sutil is considered unfortunate not to have added to his seventh-placed finish in the opening race in Australia.

He's delivering consistently every week, and we are reaping the rewards of all his hard work.

After an ignominious end to last season when Di Resta scored just two points in his final six races for a variety of reasons, Mallya has so far been highly impressed with his return to form.

"The performances of Paul confirm just how much he has matured as a driver," said Mallya.

"He's delivering consistently every week, and we are reaping the rewards of all his hard work.

"He suffered a difficult end to the 2012 season, but he's shown great mental strength and determination to regroup over the winter and recapture his best form.

"He's pushing the team on and demanding the best from everyone, which is what we need."

From his own perspective, Di Resta is content enough with how his year is so far evolving as he said: "We've got to feel very happy with how things are going and I want to congratulate everybody in the team.

"We took a very sensible approach to the winter and focused on understanding the key areas that drive performance, which seems to have paid off.

"It's important to pick up good points early in the season against our competitors, and to be ahead of McLaren after four races is a credit to the team and a nice feeling.

"Of course we want to be on the podium, and it was very close in Bahrain, but I'm sure it will come soon enough."

With this weekend's Spanish Grand Prix looming, as F1 tackles Europe for seven of the next eight races after the long-haul start to the year, Mallya is convinced his team can continue to push the best.

"After the pit stop problems in Malaysia, points finishes in China and Bahrain have set us back on the right path, but nobody in the team is taking it for granted and we will not rest on our laurels," added Mallya.

"At both the factory and at the track, everyone is working hard to ensure we can build on these good results.

"We intend to hold our ground and remain in the hunt for points and podiums.

"Having come so tantalisingly close to the podium with Paul last time out, we head to Barcelona full of optimism.

"The hard work everyone is putting in is paying off, and we hope to see the rewards this coming weekend."