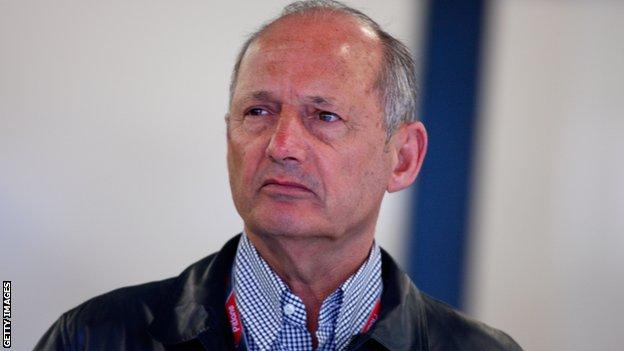 McLaren executive chairman Ron Dennis is confident they will recover from their difficult start to the F1 season.

The Woking-based outfit are sixth in the constructors' championship, with neither Jenson Button nor Sergio Perez finishing higher than fifth place.

Dennis told BBC Surrey: "Losing is an inevitable repercussion of not doing a good enough job.

"It doesn't mean to say that we are in any shape or form not focused on reversing that trend."

He added: "If you compete at the top and challenge for world championships - whether it is Formula 1 or any other category of sport - you have to come to terms with the fact that you can't always be at the top.

"It is just too difficult. Every Grand Prix team experiences it.

"It is just about hard work, a focused and committed work force, good design and good support from the people who invest in you.

"Ultimately, the tide is there to be turned. It just takes time.

"It would be great if it could be sooner rather than later, but it is not that easy."

And managing director Jonathan Neale admitted this week that there was a "big gap" from McLaren to the front of the grid.

Dennis, who first took over as McLaren team principal in 1981 and stepped down in 2009, says some outsiders have been quick to criticise the team this season.

"We live in a world, and England tends to excel in it, at jumping on people who fail and quickly forgetting when they succeeded," he said.

"McLaren's statistics do not make good reading and the biggest problem is they don't seem to have a clue where they are going.

"No team deliberately builds an uncompetitive car. At the launch they were all very happy that it was a step forward and I agreed. I still think the concept is an improvement but the devil is always in the detail and somewhere in there they have lost themselves."

"It goes with the job. If you are a high-profile organisation that is used to winning, you shouldn't be at all surprised when people are critical when you are not doing the job that they expect."

Dennis says the team must remember their previous success in the sport as they look to return to the front of the grid and the higher echelons of the classifications.

"Whilst we don't rest on our laurels, it is important to remember that we have been around 50 years and we've won 182 Grands Prix," he said.

"Since 1966, when we first competed in Formula 1, we have won one in four races in which we have entered.