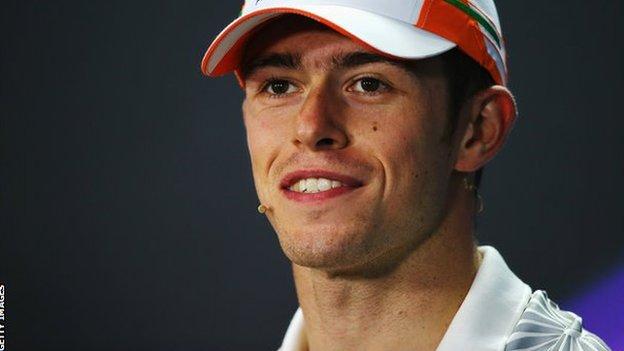 Force India driver Paul Di Resta is hoping for a top-10 finish at the Indian Grand Prix, which takes place in New Delhi a week on Sunday.

Asked if his aim was to be back among the points in New Delhi, Di Resta said: "Hopefully. In front of our board members, that's the important bit.

"We always try to do well as a team."

Di Resta, in his third season with Force India, last won points for his team at the British Grand Prix at Silverstone in June.

He finished ninth, picking up two points, despite starting 21st on the grid.

Since then, he finished outside the points at the German and Hungarian races, finishing 11th and 18th respectively, before miserable days at the Belgian, Italian, Singaporean and South Korean Grands Prix.

At Monza he was reprimanded when he collided with Lotus's Romain Grosjean at the first chicane.

And last month in Singapore, when in with a good chance of a top-10 finish, he crashed into a barrier with seven laps to go.

Reflecting on his 11th-place finish in Suzuka, Di Resta said: "I think that is where our car is at the moment.

"We lost out at the start, at the first pit stop, just leaving it a bit too late, and unfortunately struggled to stay in the points.

"We went super aggressive at the end, five laps too early to defend from Jenson [Button, who finished ninth], but I think we go away from here with our heads held high.

"I think we've over-performed and we need to do what we can at the next Grand Prix to score some points."