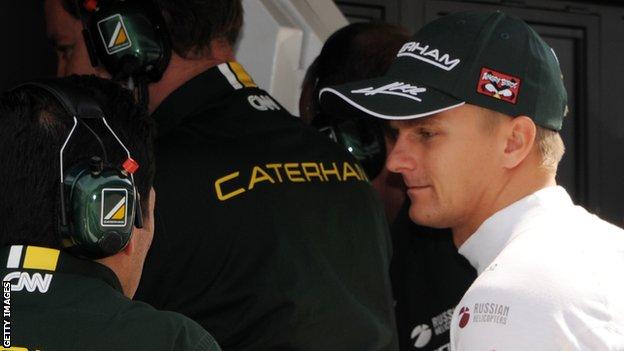 Heikki Kovalainen will replace fellow Finn Kimi Raikkonen at Lotus for the final two races of the season after seven-time world champion Michael Schumacher turned down the opportunity.

Raikkonen pulled out of this weekend's United States Grand Prix and the finale in Brazil to undergo back surgery to cure a long-standing problem.

Kovalainen, 32, has a record of one win and three podiums in 109 starts.

"It is a fantastic opportunity for me to join Lotus," he said.

"We've seen this year the car can win races and finish on the podium, so I will be pushing hard for the best results possible."

Kovalainen acknowledged joining the team so late in the season will be "a challenge" but added: "I know the team at Enstone well so I have no concerns about getting up to speed."

Lotus are battling with Mercedes and Ferrari for second place in the constructors' championship.

The team overlooked reserve Davide Valsecchi, who has driven this year's car but has limited race-weekend experience having only taken part in one session.

Schumacher, who has won 91 grands prix, was offered the chance of a second comeback to the sport by Lotus - but the 44-year-old declined.

"It is true they were asking and I can understand why. Everyone can see Michael is still very fit," Schumacher's manager Sabine Kehm told BBC Sport.

"I think it is fair to assume Michael would still be strong but he has happily settled in his new life."

So Lotus went for Kovalainen after Caterham released the Finn from his duties as a reserve.

"Obviously we had to move quickly," said team principal Eric Boullier. "On the one hand we had Davide, who is a talented young driver that has shown a great deal of promise.

"On the other we had the opportunity to bring in a seasoned Formula One competitor in Heikki."

Boullier said the team had "every faith" in Valsecchi but opted for Kovalainen's "invaluable" experience.

Most wins at one race: Eight (France)

Kovalainen began his career with Renault in 2007 and had two seasons at McLaren, during which he won the 2008 Hungarian GP.

He had two years with Lotus and spent 2012 at Caterham but was unable to score a point for either team and was without a drive this season.

Raikkonen, 34, will return to Ferrari, one of Schumacher's former teams, next season, having won the championship with the Italian team in 2007.

Schumacher retired in 2006 after a decade with Ferrari, but made a comeback with Mercedes in 2010.

He retired again at the end of the 2012 season, making way for Britain's Lewis Hamilton after the 2008 world champion left McLaren.