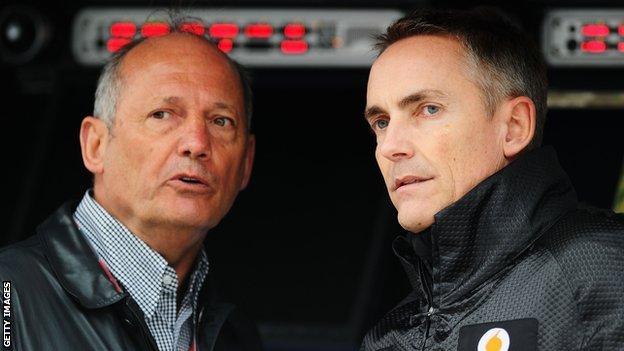 Ron Dennis has staged an internal coup and wrestled back control of the McLaren Formula 1 team.

The 66-year-old Englishman, who stood down as team principal in 2009 and had been at loggerheads with the McLaren board, has been appointed chief executive officer.

We will win again

He replaces Martin Whitmarsh, whose role as team principal is under threat.

The identity of the team principal will be announced next month, but no-one has yet been sacked or made redundant.

Dennis has been in dispute with Whitmarsh over the past two years and has tried to remove his former protege from his position on several occasions, but failed because of his fractured relationship with the other board members.

It is not clear how that relationship has been repaired.

Dennis told McLaren staff on Thursday that "there will be change" and "we will win again".

In December, he said he had spoken about the future with former Mercedes team boss Ross Brawn, who will be considered a front-runner to be McLaren's new team principal once he has finished a planned six-month sabbatical.

A senior McLaren insider told BBC Sport that Dennis, who has been dissatisfied with the performance of the F1 team for some time, did not want to return to a role on the pit wall at races.

McLaren had their worst season for three decades in 2013, failing to secure a podium finish for the first time since 1980.

In a statement, Dennis said the company's shareholders had "mandated me to write an exciting new chapter in the story of McLaren, beginning by improving our on-track and off-track performance".

He added: "Over the coming weeks, I intend to undertake a thorough and objective review of each of our businesses with the intention of optimising every aspect of our existing operations, while identifying new areas of growth that capitalise on our technologies, and where appropriate further investing in them.

"During February, I will articulate a new Group strategy and implement the organisational structure best suited to achieving it."

There has been no change in the company's shareholding. The Bahrain royal family's Mumtalakat investment fund owns 50%, with Dennis owning 25% and his long-time partner Mansour Ojjeh the remaining 25%.

Ojjeh is recovering from a double lung transplant and has temporarily relinquished his role as a director to his brother Aziz.

Whitmarsh had been trying to persuade Ferrari driver Fernando Alonso to join the team in 2015 but the latest development must make that move highly unlikely now.

Dennis and Alonso fell out in dramatic style when the Spaniard drove for McLaren in 2007.

Last month, Dennis told BBC Sport he would not have a problem with the two-time champion returning to the team, but Alonso has made it clear he still blames Dennis for their past problems.

Alonso is under contract to Ferrari until the end of 2016, although his relationship with the Italian team cooled during a troubled 2013 season.