Ferrari drivers Sebastian Vettel and Kimi Raikkonen put the first miles on their new 2017 Formula 1 car after a low-key launch on Friday.

The 'shake-down' test, which was said to be trouble-free, followed a brief online unveiling of the car.

Perhaps mindful of last year's ill-founded claim they could fight for the title, no team reaction was offered.

In 2016, president Sergio Marchionne predicted a season fighting Mercedes for supremacy, only for Ferrari to have their second winless campaign in three years.

It led to the latest in a series of management reshuffles at the Italian team as they split with technical director James Allison in July.

Allison, one of the most highly regarded design engineers in F1, starts work as Mercedes' new technical director on 1 March.

The new Ferrari, which was seen for only a couple of minutes before the broadcast ended, has been named the SF70-H, a reference to this year's being the 70th anniversary of the sportscar company.

"It is fun to drive. The car looks big and strong. The first impression is the right one. It was a good start."

The car, designed to new rules this year aimed at making the cars faster and more demanding of drivers, features a number of unique design tweaks, especially in the region of the driver's cockpit.

There are unusually high and square air intakes into the sidepods, which are integrated with airflow conditioners in a region of the car in which many teams have exhibited intricate and complex bodywork parts aimed at maximising airflow and aerodynamic downforce.

The car features a 'shark-fin' engine cover, at the rear end of which is a high-mounted narrow wing that is expected to feature on most of the cars. Already labelled a T-wing, it exploits a loophole in the bodywork regulations and cleans up the airflow in the region of the rear wing.

McLaren also launched their new car on Friday, leaving only Toro Rosso, Haas, Williams and Red Bull to unveil 2017 machinery before the start of testing on Monday.

Much is at stake this season for a new technical organisation Ferrari have talked up despite what many considered an ill-advised decision to split with former technical director James Allison, who is now at Mercedes.

The same can be said for Sebastian Vettel, who is entering the final year of his contract after a season in which tensions between him and the team were very obvious.

If they are not regular winners, the fall-out could be intense. For Ferrari, only winning will ever do. But the pressure has been mounting in recent years because they haven't been doing it anywhere near enough - and not at all last year. 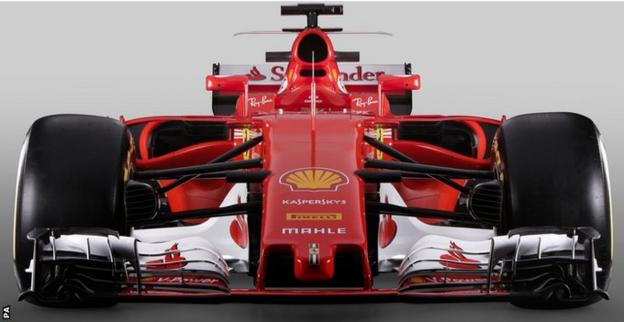