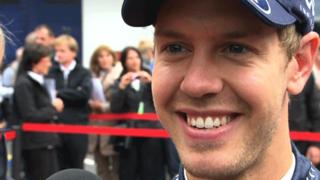 Red Bull's Sebastian Vettel insists he is not disappointed after failing to secure pole position at the German Gand Prix.

The 23-year-old finished behind McLaren's Lewis Hamilton and teammate Mark Webber to qualify outside the top two for the first time in 2011.

Although the German refuses to admit he is 'desperate' to win at the Nurburgring, he is relishing the prospect of competing at his home track.