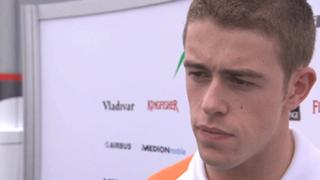 Force India's Paul di Resta is optimistic he can end his eight-race points drought at the Hungarian Grand Prix on Sunday.

The Scot says he has been "very unfortunate" in recent weeks, having finished 15th at Silverstone despite qualifying in sixth place, and 13th in Germany after he was hit from behind by Nick Heidfeld on the opening lap.

But the 25-year-old, who is in his debut F1 season, insists the Force India team are aware of the task ahead and will continue to work hard to lift themselves from seventh in the constructors' championship.

'Having a headache every day is normal'