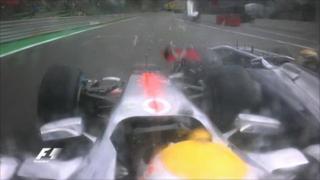 Watch highlights as Sebastian Vettel secures his ninth pole position of the season at Spa-Francorchamps ahead of the Belgian Grand Prix.

However, the German Red Bull driver's stunning lap is overshadowed by a controversial coming-together between Lewis Hamilton and Pastor Maldonado during the second part of qualifying.

Michael Schumacher and Adrian Sutil both suffer crashes, whilst a miscommunication between McLaren and Jenson Button leaves the 2009 world champion down in 13th place on the grid.