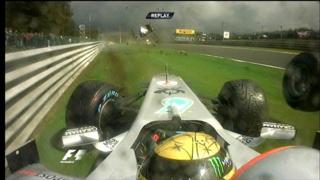 Schumacher crashes out of qualifying

Michael Schumacher crashes out on the first lap of qualifying at the Belgian Grand Prix at Spa as his Mercedes loses a wheel.

The 42-year-old German appears to lose his rear right tyre on a straight, sending hurtling him into the barrier and ending his qualifying session.

The seven-times World Champion is racing at Spa 20 years on from making his Formula One debut at the famous circuit.