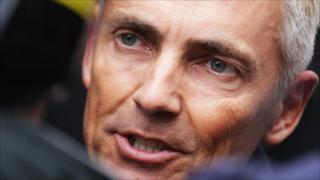 Button to stay at McLaren - Whitmarsh

McLaren team boss Martin Whitmarsh says he can "guarantee" Jenson Button will drive for the team in 2012.

The 31-year-old Briton is in the second year of a contract that includes an option on McLaren's side to extend it into a third season in 2012.

Whitmarsh adds that he would ideally like to secure Button for a period of four to five years.