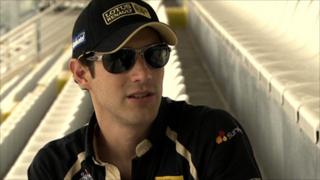 Bruno Senna talks to BBC Sport's Lee McKenzie about his Formula 1 career so far and his hopes of emulating his late uncle Ayrton's success at the historic Monza circuit.

Senna drove for HRT in 2010 without success, and began the 2011 season without a drive before being recruited to the Renault team as a replacement for Nick Heidfeld.