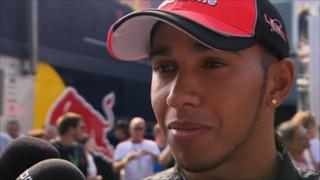 Lewis Hamilton believes McLaren can secure a one-two at the Italian GP after he and his team-mate, Jenson Button qualify second and third respectively on the grid.

However, despite finishing ahead of his team-mate Hamilton says Button is in the "best position" to start strongly at Monza because he is on the cleaner side of the grid.