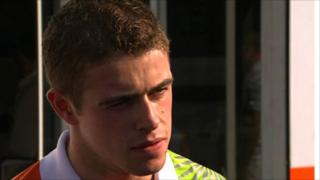 The Force India driver battled Toro Rosso's Jaime Alguersuari and Renault's Bruno Senna in the race before coming away with four points.

Di Resta discusses the pressures on him in his rookie season and when pressed on his plans for 2012, says he is just "focusing on the job" and "what will be, will be".