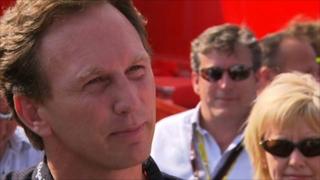 The reigning champion has been criticised by some as not being able to competitively race his opponents in the pack rather than when leading the race, but the German bravely overtook Ferrari's Fernando Alonso at 200mph to re-take the lead early on at Monza.

Horner says Vettel is "unbelievable" after his "dominant drive" gives him a 112 point lead over Alonso at the top of the Championship table.