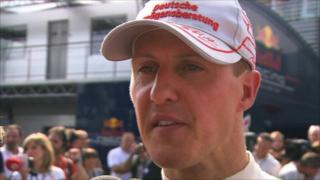 Mercedes driver Michael Schumacher says he drove fairly at the Italian Grand Prix, despite forcing Lewis Hamilton on to the grass as the McLaren driver looked to overtake him.

Schumacher, who finished fifth in Monza, adds it was difficult to keep the top drivers behind him despite a good start.