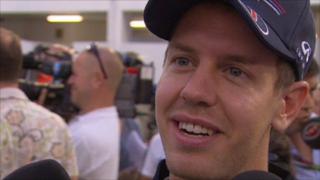 Red Bull's Sebastian Vettel says he is "excited" ahead of the Singapore Grand Prix, where he could become Formula One's youngest double world champion.

Despite having never won in Singapore, the 24 year-old tells BBC Sport's Ted Kravitz the race at Marina Bay is "one of his favourites" and that to win the title there would be "very special".