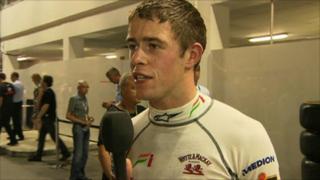 Force India's Paul Di Resta explains his team's decision not to go out on to the track in Q3, despite making it into the top-10 shoot-out.

The strategy drew criticism from BBC F1 commentators Martin Brundle and David Coulthard, but Di Resta said the team had "no choice" because they were already compromised for the race having used an extra set of the quicker tyres earlier in the session.