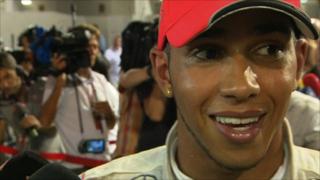 Lewis Hamilton is pleased despite an eventful qualifying session where he duelled with Ferrari's Felipe Massa, suffered a puncture and was prevented from having a second run in the third part of qualifying.

Hamilton reveals a "refuelling problem" prevented McLaren from going out again in Q3, and believes he "could have been on the front row", rather than fourth.