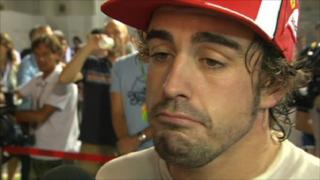 Fernando Alonso tells BBC Sport's Lee McKenzie a race win "is not out of the question", despite only qualifying fifth in his Ferrari for Sunday's race in Singapore.

Alonso says fifth was "the maximum" he could have got from the car, but is expecting tyre degradation "to play a big role" in Sunday's Grand Prix.