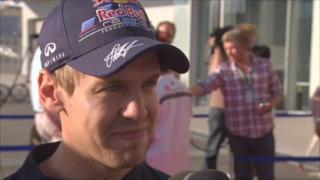 Sebastian Vettel insists Red Bull's team spirit is the secret to his success this season, saying they have never lost focus despite the car being "less dominant" than last year.

Vettel, who needs just one point from the last five races to seal the title, credits the "trust" amongst his team mates and his good start for his impressive campaign.

The German adds that he is relishing the prospect of competing at the tough and challenging Suzuka circuit.