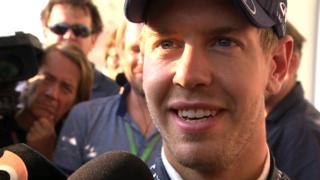 Championship leader Sebastian Vettel admits that he was "not 100% awake" as he crashes his Red Bull at the Denger corners in the final moments of practice one for the Japanese Grand Prix.

The 24-year-old Red Bull driver was third quickest in practice behind Jenson Button's McLaren, who led both sessions, with the Ferrari of Fernando Alonso in second.

The German requires just one point from the season's five remaining races to become the sport's youngest back-to-back World Champion.