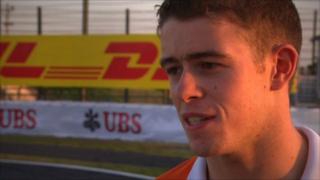 The Scotsman has impressed in his debut F1 season for Force India alongside his more experienced team-mate Adrian Sutil, and secured his best finish at the Singapore Grand Prix.

But team boss Vijay Mallya has stated he will not make a final decision on his 2012 driver line-up until December, with former Williams driver Nico Hulkenberg waiting in the wings.