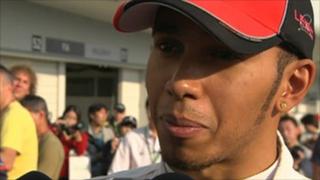 McLaren's Lewis Hamilton will not be drawn on the incident in the final part of qualifying for the Japanese Grand Prix that left him unable to set a lap time.

Hamilton only comments that the incident at the final chicane with Michael Schumacher and Mark Webber was an "interesting situation", and that he "nearly crashed" with the Australian.

However the 2008 world champion believes he "can still have a good race" and praises his team's competitiveness, saying they can realistically aim for their "first one-two of the year".