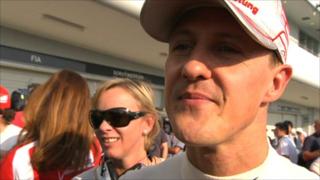 Michael Schumacher says he can't understand why Lewis Hamilton headed into the final chicane so slowly during qualifying for the Japanese Grand Prix, forcing the German and Red Bull's Mark Webber to overtake him to try and reach the start line before the chequered flag.

Schumacher and Hamilton both failed to get their final laps in, and while the Mercedes driver says it did not affect his final grid position, Hamilton missed the chance to secure a likely pole position and will start the race from third.

Brown off as Celtic held at Livingston