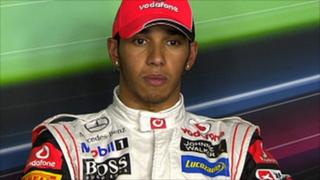 A subdued Lewis Hamilton reacts to securing the 19th pole position of his career, revealing he hopes to "redeem himself" with a race win on Sunday afternoon.

Newly-crowned world champion Sebastian Vettel believes he is in "a good position" after qualifying second for Red Bull, with Hamilton's McLaren team-mate Jenson Button in third.