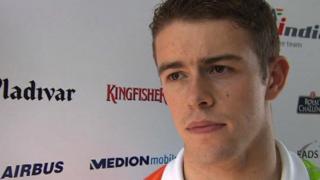 The Scotsman says he is "comfortable" competing in F1 and believes the sport is getting "safer every year".

Di Resta will compete in the home country of team owners Vijay Mallya and Sahara India Pariwar this weekend when he races at the Indian GP, and the Scot says he is out to "impress" his bosses.

How to watch Fulham v Everton with BBC