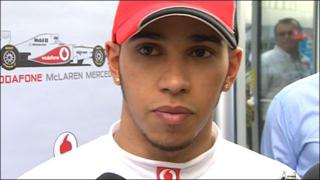 McLaren's Lewis Hamilton tells BBC Sport's Ted Kravitz that the decision to hand him a three-place grid penalty at the Indian Grand Prix for ignoring caution flags was justified.

Sauber's Sergio Perez was also been handed the same penalty, which arose at the end of the Friday morning session at the new Buddh International Circuit.