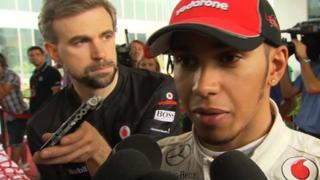 McLaren's Lewis Hamilton says he is pleased with his qualifying performance, despite being handed a three-place grid drop for pignoring yellow flags during practice on Friday.

The 2008 world champion qualified second-fastest behind Sebastian Vettel, and says he is optimistic of having a strong race in the first-ever Indian Grand Prix.