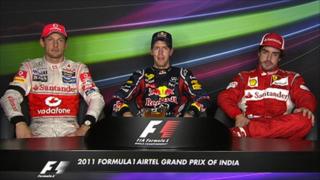 Sebastian Vettel says his victory at the inaugural Indian Grand Prix was "very enjoyable" after a perfect weekend for the double world champion where he secured pole position, the fastest lap and led every lap of the race.

There are mixed emotions following the race however, with the top three drivers revealing the deaths of Dan Wheldon and Marco Simoncelli are in their thoughts.