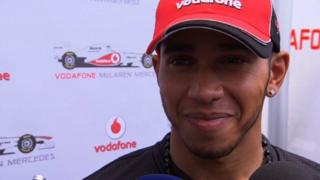 McLaren's Lewis Hamilton says he is in a positive mood ahead of the Brazilian GP after meeting former pop star girlfriend Nicole Scherzinger for lunch in LA.

The McLaren driver has had a topsy-turvy year, marked by three wins and a number of on and off-track incidents.

But he says he is approaching his peak and is hoping to start afresh and believes he can challenge for the drivers' title in 2012.