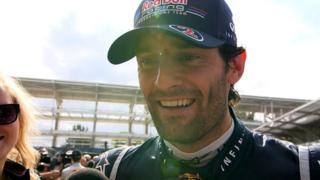 Brazilian Grand Prix winner Mark Webber says there was a tinge of disappointment when he was told Red Bull team-mate Sebastian Vettel had a mechanical problem as he wanted "a normal fight" in the last race of the 2011 F1 season.

Webber's victory at Interlagos was his first of the year, and he promises to be back and fight harder in 2012.