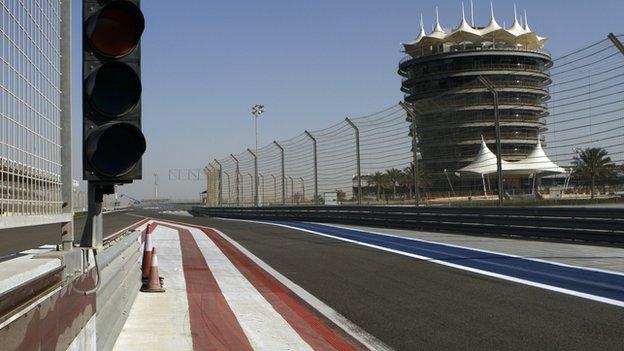 Formula 1 has been urged to call off the Bahrain Grand Prix by a group of leading British peers in the wake of continuing unrest in the Gulf state.

Seven Lords, along with Green Party MP Caroline Lucas, wrote a letter to the Times expressing "concern [about] the decision to go ahead with the race".

It added: "We do not believe the time is right to return to Bahrain."

The race, called off last year in the wake of civil unrest, is scheduled as the season's fourth event, on 22 April.

Given the current dire situation, with daily street protests and the deaths of more civilians, we do not believe that the time is right for Formula 1 to return to Bahrain

The authors go on to say they feel there has been little progress towards a political settlement in Bahrain, despite a damning report by an independent inquiry last year and pledges by the ruling royal family to instigate reform.

"It was hoped that the recommendations of the Bahrain Independent Commission of Inquiry (BICI) would provide a starting point for political reform which both government and opposition forces could agree upon," the letter says.

"However, two months on we see an entrenchment of the positions of both sides which risks letting more extreme voices dictate the progress of the conflict.

"Given the current dire situation, with daily street protests and the deaths of more civilians, we do not believe that the time is right for Formula 1 to return to Bahrain."

The letter is signed by Lords Ahmad of Wimbledon, Ahmed of Rotherham, Alton, Avebury, Hylton and Boswell, Baroness Falkner of Margravine and Brighton MP Lucas.

The letter comes a month after the Bahrain Centre for Human Rights, an opposition group, called for the F1 teams to boycott the race.

F1 boss Bernie Ecclestone has said he sees no reason not to hold the race.

"Everyone talks a lot about this part of the world, but Bahrain is the country in the region where there are the fewest problems," he said in an interview with the Salzburger Nachrichten newspaper last month.

The F1 teams have said they will be led by Ecclestone and governing body the FIA.

The situation is complicated for F1 bosses by a rule that says any race called off within three months of its scheduled date cannot be put on the following year's calendar except in the case of force majeure.