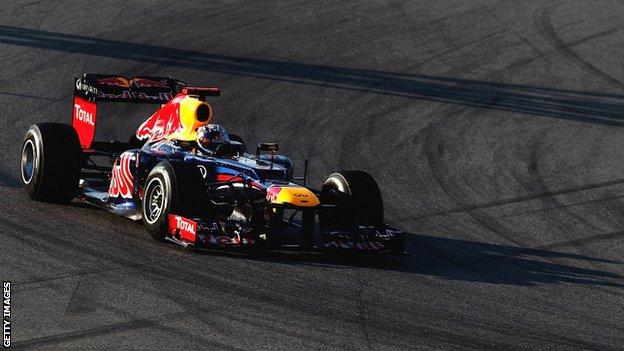 Red Bull's Sebastian Vettel set the pace on the first day of the second 2012 pre-season test.

After the first of four days' testing at the Circuit de Catalunya near Barcelona, the world champion was 0.175 seconds faster than Force India's Nico Hulkenberg.

Eleven of the 12 teams are at the Circuit de Catalunya until Friday.

The biggest attraction of the day was the first public appearance of the new Mercedes, which was not ready in time to feature at the first pre-season test at Jerez in southern Spain a fortnight ago.

The car, named the W03, made a promising start, setting quick times as soon as seven-time world champion Michael Schumacher had finished with his early 'installation' runs.

Vettel is fastest after the first day, which you might expect from a car that had such good downforce last year, but it's wiser to wait until the second or third day before drawing any conclusions

Schumacher ended the day sixth fastest overall, 0.885secs down on the Red Bull.

Vettel was the first big name to clock the fastest times, with an initial run 0.2secs up on Hamilton's.

The Red Bull slipped down the timesheets later as first Hamilton and then Schumacher and Alonso improved their pace, before Vettel leapt back ahead of Hulkenberg to set the fastest time before lunch. He consolidated his position with his fastest time midway through the afternoon.

Headline lap times in testing are a notoriously unreliable guide to form, as it is impossible to know the specifications in which the teams are running their cars.

This was emphasised by Hulkenberg's second place - his Force India team do not expect to be contending at the front this season.

Hamilton's fastest time was 0.325secs slower than Vettel's, while Alonso was 0.835secs down on the Red Bull. But Vettel played down the significance of the times.

"The cars have less grip than last year, but we try to come back from that slowly," he said.

"It's difficult to judge where we are compared with the others right now. It's all based on feeling and the feeling I have inside the car at the moment is fine."

Nowhere, arguably, is the need to improve felt more greatly than at Mercedes, the team trying to make F1's "big three" into a quartet.

McLaren team manager Dave Redding described it as "a very productive day. The car ran reliably and without problem all day and Lewis was happy with the car."

Vettel said he had been impressed by the McLaren's pace on longer runs on several laps at a time, and the times bear out that impression.

Direct comparisons are dangerous because the fuel loads of the cars are not known and 10kg of fuel equates to 0.35secs of lap time.

The German added that Ferrari, who struggled in the first test, were "a bit of a secret - nobody knows whether they are really good or really bad".

Schumacher said he was happy with his new car's performance.

"My initial feelings with our new car are certainly good," the German veteran said.

"It's certainly an improvement and we have worked hard on the areas we had defined last year. The aerodynamics figures look good so I'm not worried about the shape of the nose.

"Even though we had the hydraulic problem today, I'm pleased with all the mileage we have achieved with the new car."

The Lotus team when Romain Grosjean had to stop running after just seven laps with what the team described as a "chassis problem".

Team boss Eric Boullier initially played down concerns by describing it as a "minor issue" but later the team decided to cancel the rest of the test.

BBC F1 technical analyst Gary Anderson, the former technical director of the Jordan, Stewart and Jaguar teams, said: "It must be pretty serious for them to stop after just seven laps. A front suspension or engine mount are the only things that spring to mind."