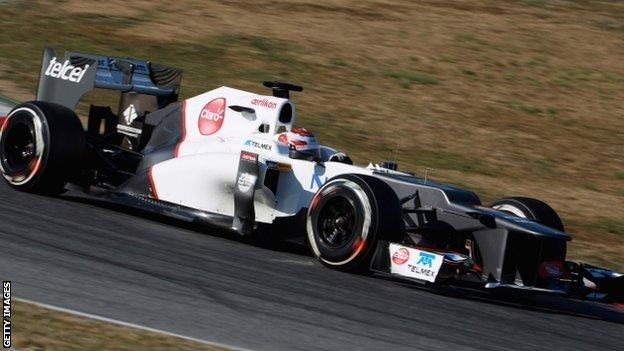 Sauber's Kamui Kobayashi set the pace on the final day of the second pre-season test in Spain.

Kobayashi was 0.249 seconds ahead of Williams's Pastor Maldonado with the best time of the week, beating Maldonado's Thursday lap by 0.079secs.

The Ferrari of Felipe Massa and Red Bull's Mark Webber were fifth and sixth ahead of Toro Rosso's Jean-Eric Vergne.

Ten of the 12 teams have been in Spain preparing for the first race of the season in Australia on 18 March.

World champions Red Bull are widely considered to have the fastest car, but testing is a notoriously unreliable guide to form.

"This was one of the most confusing pre-season tests I can remember in terms of trying to work out what was going on. The big teams have been keeping their powder dry. They look like they're confident enough to not need to go out there and see what the car can do on a big one-off lap. Red Bull and McLaren both look not too bad, but I'm sure the Red Bull will still be the quickest car. I don't see any reason why the McLaren would be quicker. Having a lower chassis might be more attractive but if there is anything in it on the performance side it's going to be a negative not a positive. Ferrari look like they're still trying to find their feet a bit with their car. Meanwhile, Sauber and Williams are doing reasonable lap times. It seems to suggest that the pack will be closed up a bit front to back - which can only be a good thing."

That's because lap times are sensitive to tyres and fuel loads and it is impossible to know the specification in which the teams are running the cars.

Webber said: "We've done well over these last two tests and the feeling is pretty good."

And Button has said he expects Vettel's advantage to be smaller than it was at the start of last year.

McLaren have a major upgrade to come on their car at the final pre-season test, which starts at the same track on 1 March.

Button said after Thursday's testing: "We have an update on the car for the first race. It is not a completely straightforward update as it is not about bolting downforce on the car - it is slightly more than that.

"I just hope we are going in the right direction. The wind tunnel says we are. I am looking to the update next week, and then we can start balancing the car and finding a direction for the first race."

He did not speak to the media on Friday but McLaren team manager Dave Redding said it had been "a very productive week".

Ferrari have been playing down their car's performance, and it is especially difficult to read their form as, unlike McLaren and Red Bull, they have so far not done any race-distance runs.

Also running on Friday were Heikki Kovalainen in the Caterham and Nico Rosberg in the Mercedes.

Meanwhile, Formula 1's governing body, the FIA, has issued a rule clarification on engine mapping in an attempt to close off any possible use of exhausts for aerodynamic effect.

This was the intent of a number of rule changes for this year, as the FIA sought to ban what had become an increasingly influential practice.

Some teams alerted the FIA to the fact that the rules left open the possibility to deliberately induce a misfire on the over-run - when the engine is used for braking - to allow more throttle than would normally be permitted.

If the exhausts were still having an aerodynamic effect, this would boost it. It is believed no teams had done this so far - but the FIA has acted to ensure they cannot in the future.