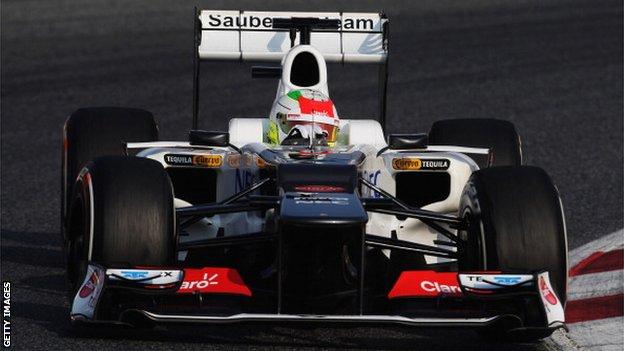 Perez was just 0.009 seconds faster than the 2009 world champion as Sauber tried a qualifying simulation run.

Red Bull's Mark Webber was only eighth fastest despite the team running a new car with major development parts on it.

The world champions were the talk of the pit lane as Webber rolled out in a car with a new front wing and completely redesigned rear end.

"The first impressions are that the Red Bull is a really nicely detailed car - there are ducts and bits and pieces everywhere. It's a very complicated bodywork set-up and it will take some more looking at to understand what's going on. Ferrari also look like they've done some more work on that exhaust exit area - but I understand they have new bodywork and engine cover coming that will change it all again. Everyone seems to be working hard on that area in an attempt to try to emulate what they got from the exhaust-blown diffusers last year."

Team principal Christian Horner described the changes as "fairly subtle" and "an evolution" and said the car was running this weekend in the specification in which it would race in Australia at the first grand prix of the season in two weeks' time.

Webber said the car was "not massively different" and that there were a few more new parts arriving for the final day the test on Sunday, when Sebastian Vettel was driving.

"There are clearly some fast cars here," the Australian added. "Everyone today in the 22s is not hanging around at Barcelona these days."

There were so many new parts on it that the team preferred to fly out a new chassis with them already fitted rather than go through the time-consuming process of adapting the car that had been running for the first two days of the test at Spain's Circuit de Catalunya.

McLaren also had some new parts - Button tried out revised front-end aerodynamics that were a departure from the design philosophy McLaren have followed in recent years.

They have abandoned the horizontal wing section under the nose of the car and replaced it with vertical air deflectors which descend from either side of the nose between the front wheels.

But he was not able to spend as much time working on them as the team wanted because of hydraulics problems in the morning and rain for the final part of the afternoon.

Button said: "Immediately when we put them on the car felt much better, there were some areas we knew were lacking but would improve when we put the new parts on.

"It's a definite step forward but we weren't able to get a perfect set-up but hopefully Lewis (Hamilton) will get a nice clean day tomorrow. The feeling is positive."

Ferrari were also trying out some new parts, but attention was focused on the team's decision to cancel their drivers' news conferences this weekend.

Felipe Massa was scheduled to talk on Saturday evening and Fernando Alonso on Sunday, after each driver had finished his final day's running before the first race in Australia on 18 March.

But Ferrari have called the briefings off because they did not want the drivers to be asked questions they could not answer.

The team have been struggling to understand their radical new car design, which has looked inconsistent and unstable out on the track.

BBC Sport understands the Ferrari sometimes behaves predictably and well and at others times it does not - and the team do not know why.

Technical director Pat Fry, who is in his first year in the job following the dismissal of his predecessor Aldo Costa last May, will talk to the media instead on Sunday.

Saturday's running was disrupted by rain in mid-afternoon, which ended a race-simulation Massa was doing in the Ferrari.

Kimi Raikkonen did not have a happy time in his first run in the Lotus since the first test early last month.

The team were forced to cancel their running at the second test after discovering a problem with the car's front suspension mounts, which was fixed for this test.

The car's power steering system failed, and the 32-year-old lost much of the day's running as the the mechanics tried to fix it.

The Finn, who is returning to F1 after two years in rallying, ended up last in the time sheets.

Pre-season testing times are a notoriously unreliable means of predicting form as it is impossible to know the specification in which the teams are running their cars.