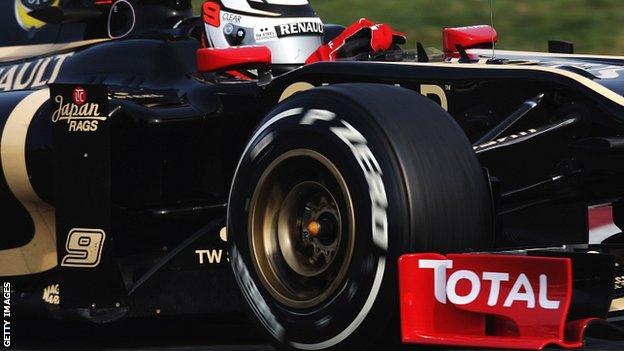 Finn Raikkonen, 32, who returns to F1 this season after two years in rallying, set a time 0.220 seconds faster than Alonso.

Red Bull's Sebastian Vettel was slowest after a day beset by problems.

The world champion had hoped to try out the new aerodynamic package the team brought to Barcelona's Circuit de Catalunya for the first time on Saturday.

But he caused a delay in the morning when he ran off the track, damaging his front wing and diffuser, and then suffered gearbox problems before lunch which kept him out of action for most of the afternoon.

Vettel managed to get out for a brief run with 10 minutes of the session remaining but completed only 22 laps throughout the day, while Hamilton, Alonso and Raikkonen all managed more than 100.

Vettel said he did not want to predict which teams were in the best shape heading to the first race in Melbourne on 18 March.

"You never really know where you are until you get to Melbourne and everyone puts their pants down and you can see what they have got and you can show what you have got in qualifying," the German said.

"Up and down the pit lane all the technical directors seem to agree this will be the closest season for years. It means teams will be punished for any small mistake - you could lose 10 grid places if you get it even slightly wrong. It should be a great year."

Asked to rate his pre-season testing out of 10, he said: "You always have things you hope were better, there are not many years you can give yourselves a 10. Overall we can be quite happy, happier than five and less than 10. Somewhere in between."

Raikkonen's lap time was the fastest of the winter and underlined the impression that his team - who have raced as Renault since 2002 - have produced a good car.

But a number of other teams have also shone occasionally.

Alonso's second fastest time belies the impression that his team are struggling, one confirmed by the Spaniard on television on Saturday evening.

On Saturday, Ferrari cancelled the news conference Alonso was scheduled to give after he had finished testing on Sunday.

But he told TV stations while attending the Barcelona v Sporting football match on Saturday evening: "In the first races we will suffer because we are not 100%."

Mercedes team boss Ross Brawn, whose driver Michael Schumacher was eighth overall, echoed the views of many in the paddock in saying that the field seemed more closely matched than for many years.

"The cars look as if they're going to be a bit closer," Brawn said. "I think we're going to have a really exciting season. It could be one of the best we've seen for a number of years."