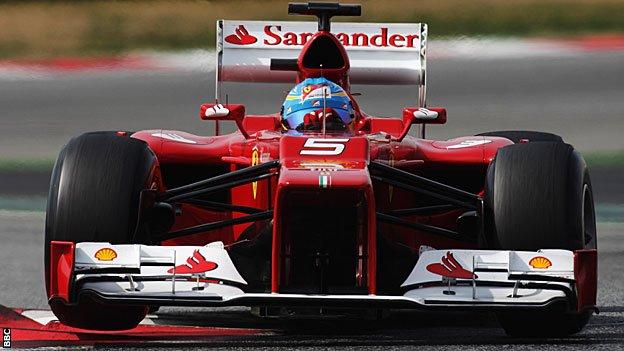 The Formula 1 rules get ever tighter as the sport's bosses try to keep speeds under control, but there is still room for innovation - and this year is no exception.

BBC F1 technical analyst Gary Anderson - who has 13 years of F1 design experience as former technical director of the Jordan, Stewart and Jaguar teams - guides you through the stand-out features on cars up and down the pitlane.

Ferrari have re-introduced pull-rod front suspension to their car - the first time anyone has used this in F1 since Minardi in 2001.

Ironically, their driver that year was then-rookie Fernando Alonso, now Ferrari's number one.

Most teams use push-rod front suspension - where the suspension arm runs from the bottom of the front wheel to the top of the chassis. Pull-rod works the other way around.

Outside Ferrari, I'm not sure you'd find anyone in F1 who can see the advantage of it.

In theory, there are two slight pluses:

1) The weight of the springs and dampers is lower down as they are mounted on the floor of the chassis rather than on top of it. This will slightly lower the centre of gravity of the car.

2) The pull-rod itself might offer a slight aerodynamic advantage as its angle is more in harmony with the airflow coming off the front wing, and therefore should be more effective at directing it where the team want it to go - under the car.

But any advantage from either of these two characteristics will be very small, and in fact the weight advantage from the new location of the springs, dampers and torsion bars is likely to be counter-balanced by the need for the top wishbone to be stronger and therefore heavier because of the higher forces going through it.

Meanwhile, there is a much bigger disadvantage to using pull-rod suspension in terms of the limitations it creates in being able to tune the car's handling.

If you move the push-rod mounting point backwards or forwards of the fulcrum of the top and bottom wishbone, you can transfer load across the car when the driver is steering and effectively lighten the front wheel.  That means the car can be tuned to work in both high- and low-speed corners.

It allows you to make the car softer and more compliant in low-speed corners without softening the suspension - thereby keeping the high mechanical stiffness you need in the car for high-speed corners.

But the pull-rod is connected to the wishbone, not the upright, so that tuning facility is not available in the same way for Ferrari.

You can still do some of it with the king-pin and castor angles, but anything you do that helps you in one area of the track will hurt you in another.

That compromise doesn't exist with push-rods. So getting the ideal balance in handling characteristics for both low- and high-speed corners is tougher with pull-rod front suspension than with push-rod.

Ferrari have effectively taken a tool out of their tool kit. Would it have fixed the handling imbalance they are struggling with at the moment between high- and low-speed corners?

They'll never know because they can't use it.

Having said that, they might be OK in Melbourne because the track is mainly about low-speed and traction. And even in Barcelona, on new tyres, it looked reasonable. It was lap three of a run that it started to be a problem.

The most obvious feature of the McLaren is that they are the only one of the top 10 teams to have a lower chassis without the step on top.

That's because they were pursuing a design philosophy they have followed for the last two or three years which didn't require as high a nose.

But they tested some new parts at the final pre-season test which changed the concept at the front of the car to one more like that used by most other teams.

They removed the horizontal splitter they had under the nose that was aimed at directing the air off the front wing, and replaced it with vertical guide vanes descending from either side of the chassis.

The vanes McLaren used were about 200mm high - but with a higher chassis they could be as much as 275mm, which would make it more powerful.

Will that be a deal-breaker in terms of wins? It's a matter of how close they are.

Meanwhile, of the teams trying to get their exhausts to blow on the rear brake duct/diffuser area and increase downforce, McLaren are probably doing it best.

The car looks well balanced out on the track, not nervous like you often see it with Lewis Hamilton driving, and that should suit Jenson Button.

Red Bull introduced a 'B' version of their car at the final test, with a revised front wing and redesigned rear bodywork aimed at getting the most out of directing the exhaust gases at the floor.

They are channeling the exhaust at the point where the floor ends next to the rear wheels.

They're trying to speed up the airflow underneath the rear brake ducts, which helps suck the air out of the underbody faster.

There might be more downforce with the 'B'-spec car, but it appears to be making it more difficult to drive.

I've also seen a couple of pictures showing very hot bits of bodywork in a strange place at the back of the car.

I'm not sure how they got that hot but it suggests that the exhaust gases might not be going where Red Bull want us to think they are.

The theory is good - it's about getting the rear of the car to influence the air flow coming out from underneath the front of the car and help speed it up.

However, it's noticeable that while the bigger teams all have sidepods that taper in towards the bottom, they haven't pursued the idea in as extreme a fashion as Toro Rosso.

The obvious reason for this is that there is a big centre-of-gravity deficit in getting all the radiators and so on up away from the floor.

It looks nice, and they have obviously gone away and thought about it, but whether there is any significant benefit in it is doubtful.

It's very difficult to put an order on that midfield group at the moment, but it does look as if Williams are still at the back of it, with Caterham (formerly Team Lotus) behind them but a lot closer than last year.

I expect Lotus to be the midfield team who are most regularly top-10 qualifiers.

Mercedes seem likely to move up into the top three, with Red Bull and McLaren, in place of Ferrari.

But I wouldn't be that surprised to see Alonso in the top six on the grid in Melbourne - when push comes to shove there is no-one better at dragging a lap out of a less-than-willing car.