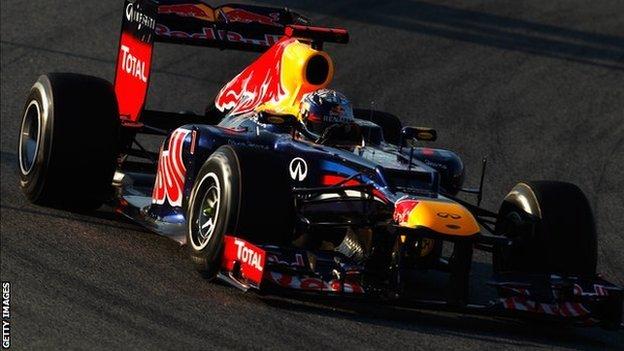 The Formula 1 rule book is a constantly evolving entity - and 2012 is no exception. BBC F1's technical analyst Gary Anderson - the former technical director of the Jordan, Stewart and Jaguar teams - is your guide to the key changes for this season.

The main rule changes concern an attempt to limit the influence of the exhausts on the aerodynamics of the car.

This had developed over the last two seasons into F1's must-have technology.

Teams were devoting increasing amounts of resources to blowing the exhausts over the floor of the cars even when the drivers were off the throttle because it was so effective in producing large amounts of stable, consistent downforce.

But governing body the FIA felt that blowing fuel through the exhausts when the car was slowing down for corners was a waste of resources, and they thought that created a negative image about profligacy in a time of increasing environmental concerns.

I think some teams - particularly Ferrari - are guilty of spending too much resource looking at what they can gain out of the exhaust, and losing sight of the key fundamentals of the car design

That is true. The FIA didn't need to change the car design as well just to achieve that - but it took the opportunity to try to limit downforce as well.

So whereas last year exhausts pipes flowed along the floor of the car, there is now a defined area on top of the rear bodywork within which the exhaust can exit. The angle, diameter and length of the final section of pipe is also stipulated. And restrictions on engine mapping have been introduced to prevent fuelling when the driver is off throttle.

However, in terms of both the location of the exhaust exits and where the gases are being directed, the rules stating that any aerodynamic effect must be incidental are being pushed pretty hard - teams are still trying to get something from it.

Last year, with the blown diffusers working at their maximum, the technology was probably worth between 0.8 and one second a lap. Now, even if you're exploiting what you can do to the maximum, it'll be more like 0.1-0.2secs.

I think some teams - particularly Ferrari - are guilty of spending too much resource looking at what they can gain out of the exhaust, and losing sight of the key fundamentals of the car design.

You've got to be very careful you don't commit your resources in the wrong direction.

Anyone who has seen any of the new generation of F1 cars will have noticed the ugly step on the top of the noses in the area of the front tyres.

It is a result of a rule introduced to lower the height of the front nose to reduce the risk of drivers being hurt in T-bone-type accidents.

The problem was the nose height was lowered, to 550mm above the floor of the car, but the teams rejected the FIA's plans to lower the maximum height of the chassis from 625mm.

They were given a distance of 150mm to transition from one height to the other, which effectively wrote the shape of the chassis tops for the teams.

It is a regulation change that has achieved very little apart from creating ugly cars.

As well as the wide-ranging engine mapping restrictions, there have also been limits put on what teams can do with clutches, in an attempt to constrain what is effectively a form of traction control at the starts.

The drivers are still controlling the clutch but so much sophisticated work has been done to increase the knowledge of clutches and how to control slip that I suspect very little will change.

Watching the drivers practise starts in the pit-lane during winter testing, it was amazing how little wheelspin they were generating.

One of the biggest changes for this year will be the ability for lapped cars to overtake the safety car and reform at the tail of the field.

That could have a positive effect on the racing because it will mean there will now be no slower cars between the front-runners at a re-start after a safety car period.

It's always nice to see the top guys having a ding-dong after they've been closed back up again, and if there are a couple of slower cars in the way they can't do that as easily.

Following the controversy over what had been an informal agreement between the drivers and race director Charlie Whiting has now been enshrined in the regulations.

This rule states that if a driver moves off the racing line to defend his position, he must leave at least a car's length to his outside if he then moves back towards the line.

Leaving room on the outside for another car is a good thing, but it's going to be so hard to police.

I think having it in the rules will make the drivers respect it a bit more. But I'm not sure how stewards watching on television will be able to judge accurately what is a car's width, or what is slightly less.

A new rule has been added to the regulations after Sebastian Vettel cut out a bit of the track on his way back to the pits during a practice session in Korea last year to save himself some time.

The rule bans this practice - but actually it wasn't needed. There was already a rule saying the car must stay on the track at all times. Vettel didn't, so what he did was wrong.

Had the stewards imposed a penalty in Korea, that would have made the point, but now we've got another rule as well spelling it out.

The only difference this will make is that if a team or driver has misjudged things and are running out of time to get back to the pits in time for another run, they won't be able to do anything about it.