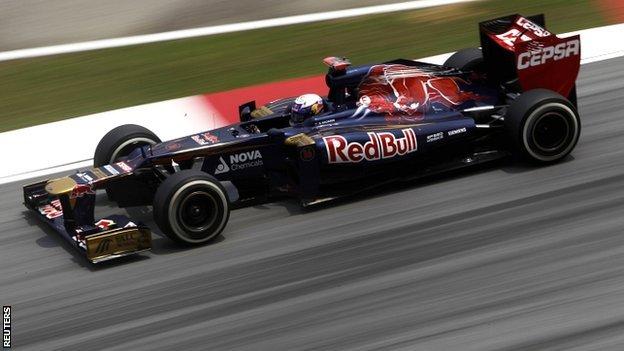 Former grand prix winner Gerhard Berger teamed up with Red Bull owner Dietrich Mateschitz to buy the Minardi team from Paul Stoddart at the end of the 2005 season and rebranded it Toro Rosso.

Essentially the team exists to blood new drivers for the senior Red Bull team, with Vitantonio Liuzzi and Scott Speed the team's drivers in their debut season.

Liuzzi scored their debut point in the 2006 United States Grand Prix in a season that was otherwise disappointing. The team continued its struggles in 2007, with Speed being replaced by Sebastian Vettel towards the end of the season.

Vettel finished fourth in the Chinese Grand Prix that season to claim the team's best result before securing the team's first pole position and victory in the rain-hit 2008 Italian Grand Prix.

Following his strong performance, Vettel made the move to Red Bull for 2009 and Toro Rosso's form nose-dived with Sebastian Bourdais leaving the team mid-season and Jaime Alguersuari stepping in to partner Sebastien Buemi.

Since then, the team have been a consistent midfield contender, regularly challenging for the lower points placings.

Why do Toro Rosso race?

As a team involved in any sport, we race to win.

As a business, Red Bull created this team to promote its product to increase sales. F1 is a great shop window, as its viewing figures are huge and it is a truly global sport.

What is special about Toro Rosso?

Toro Rosso is special for several reasons, starting with the fact that we are one of the smallest, if not the smallest team on the grid.

But I don't like to say we are the underdog, because that suggests we are not capable of beating the others.

Along with Red Bull Racing, we are the only two teams owned by the same company and we were created to give youngsters, who have come up through the lower formulae, as part of the Red Bull Junior Driver programme, a chance to reach the top level of motor racing.

What is the team's status in Formula 1?

Your status is defined by how well you do, how many races and championships you have won. So, at the moment, we are not seen as a top team.

What is the team's image?

The team's image is now a mix of the image it inherited from its parent company Red Bull - which means it is a bit different to the rest, is fiercely competitive, but also likes to have a smile on its face - combined with the image it has developed from the people who work here.

Because a team is about the people, it definitely has an Italian feel to it.

Why should people support Toro Rosso?

If your team were an animal what would it be?

We are called Toro Rosso, which is Italian for Red Bull, so what else could we be?

What does a team boss do?

He leads the team.

What is the most difficult thing about being a team boss? Recruiting a team with specialised knowledge, which works well together; finding the money to run such a team and creating visions for the future.

Are you worried about the future of F1?

F1 is not immune to the current recession, so there is cause for concern. But, I feel the sport has reacted well and recent initiatives worked out by the governing body the FIA along with Fota, the team association, should see F1 emerge from this difficult period in better shape than before.