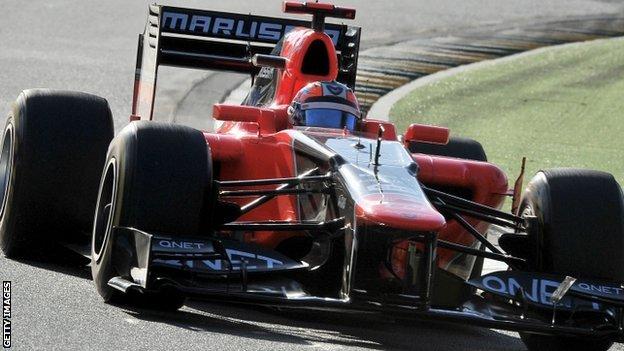 Marussia entered the sport under the Virgin moniker in 2010, alongside fellow new teams Lotus (now Caterham) and HRT.

Backed by businessman Richard Branson and designed and developed by Wirth Research using computational fluid dynamics (CFD), the red and black machines had a tough first season in the sport.

They suffered an embarrassment early on after building the car with a fuel tank which was too small to enable drivers to get to the end of races.

Timo Glock and Lucas di Grassi secured the team's first double finish in the Spanish Grand Prix, but they rarely challenged the midfield teams and ended up last in the constructors' championship.

Russian car company Marussia acquired a controlling stake in the team towards the end of 2011, a year in which they showed a marked improvement in reliability, finishing most of the races. However, they still lacked the pace and split with Wirth midway through the season.

In 2012, the team rebranded as Marussia, and drafted in Charles Pic to race alongside Glock. Former Renault technical director Pat Symonds was involved in the car design as a consultant, however the team have continued to struggle.