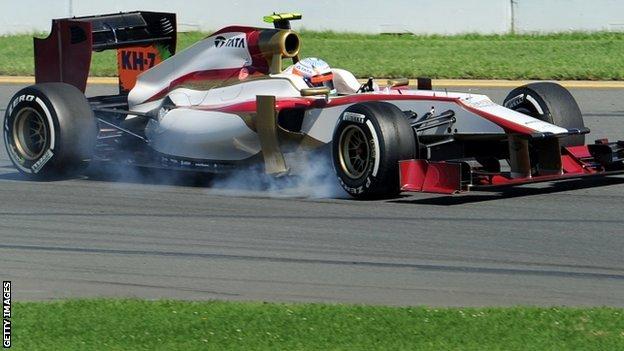 The Spanish team entered the sport in 2010 alongside Lotus (now Caterham) and Virgin under the Hispania name, with Bruno Senna and Karun Chandhok at the wheel.

With no pre-season testing, the F110 completed its first lap during practice for the 2010 season-opener in Bahrain and the team's struggles continued throughout the season.

While they failed to trouble the points-paying positions, the team did beat rivals Virgin in the constructors' championship courtesy of higher race finishes earlier in the season than Virgin.

Their second season was just as much of a struggle, but the news that investment company Thesan Capital had bought a controlling stake in the team was encouraging for the future. They also beat Virgin in the constructors' again, even if they rarely challenged them on track.

In 2012, Spaniard Pedro de la Rosa signed for the team, now known as HRT, alongside Narain Karthikeyan. And while they struggled to get the car ready once more, their pace has improved to challenge the Marussia cars (formerly Virgin) in terms of race pace.

To help strengthen their position as a long-term prospect, they have since moved into a new factory in Madrid.