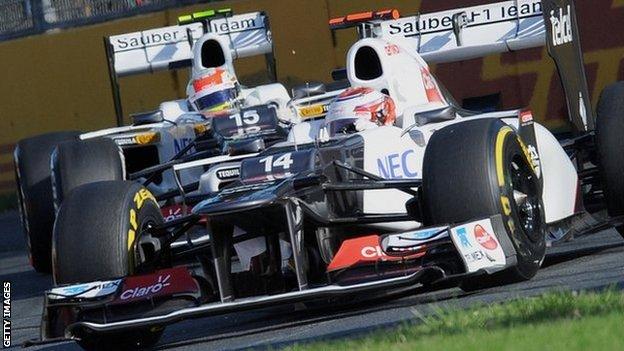 Following success in the Le Mans 24 Hours and the World Sportscar Championship, Peter Sauber entered Formula 1 in 1993 with the backing of Mercedes-Benz.

The Swiss outfit ran JJ Lehto and Karl Wendlinger in their debut season, with the former scoring a fifth place and two points on his debut. While the team scored five more points finishes that season, poor reliability led to 18 retirements.

German driver Heinz-Harald Frentzen scored the team's first podium in the 1995 Belgian Grand Prix with third, on their way to seventh in the constructors' championship.

A consistent midfield team throughout the 1990s, Sauber turned a corner when they took on a young Kimi Raikkonen alongside Nick Heidfeld for the 2001 season. The team scored points regularly, including one podium, to finish fourth in the constructors' - their highest finish to date.

At the end of the 2005 season, BMW bought a majority stake in the team, with Sauber retaining a small portion, and rebranded the squad BMW Sauber. The team saw a marked upturn in form, with Robert Kubica giving the team their first victory in the 2008 Canadian Grand Prix.

When BMW pulled out at the end of 2009, Sauber bought the team back and returned to the grid in 2010. Results were slow in coming for Pedro de la Rosa and Kamui Kobayashi, but by the second half of the season, they were consistently challenging for points.

In 2012, Sergio Perez - who joined the team in 2011 - scored the team's best finish as an independent when he took second place in the Malaysian Grand Prix.

To deliver the show that the fans want to see.

Yes, if not with their own team then as an engine supplier.

The best piece of advice I have ever given a driver is...

I can't remember - this means that whatever my advice was, it was maybe not so impressive.

Stay as you are.

Are you a wheeler-dealer or a techie?

I am team principal, entrepreneur, I drove races myself and I built cars. This is a quite unique combination.

I worked in the factory of my dad and earned my first Swiss francs.

What is special about Sauber?

It's the fact that the team is based in Switzerland, and it has been successful for 40 years.

Why should people support Sauber?

It's a friendly, but serious team which had good success without making much noise away from the track. The team has nurtured young talent and brought some great names into Formula 1.

If you leave money aside, which is important in Formula 1, then it's about getting the right people. The people are the most important asset in Formula 1.