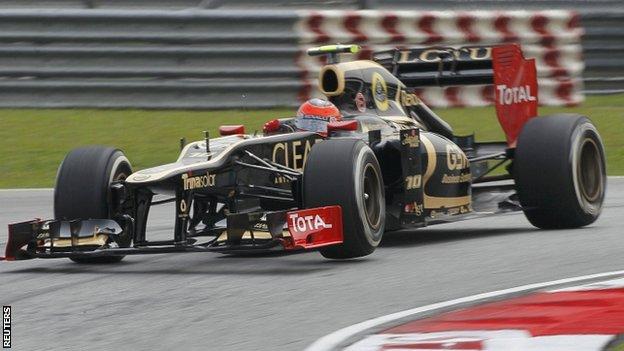 Formerly known as Renault, Lotus took its new name after the famous sports car manufacturer came under new ownership and had the name transfered from Team Lotus, who are now known as Caterham.

Although Lotus are a prestigious name in formula 1, with drivers' and constructors' titles won with founder Colin Chapman at the helm, the origins of the team we know as Lotus in 2012 are very different. They go back to 1981 when Toleman entered the sport with a young Ayrton Senna, achieving their best result with second place in the 1984 Monaco Grand Prix.

Over the next 16 years, the team won 27 races, 15 pole positions, two drivers' championship - via Michael Schumacher in 1994 and 1995 - and one constructors' title before their engine supplier Renault bought the team outright in 2002.

Renault, which previously raced in the sport between 1977 and 1985, secured two drivers' and constructors' championships when Fernando Alonso triumphed in 2005 and 2006 before selling a majority stake in the team to investment management company Genii.

For 2012, the team recruited Kimi Raikkonen, who won the world title in 2007 but has spent the last two years competing in the World Rally Championship, to race alongside Frenchman Romain Grosjean.

Nothing is too challenging or difficult if you are surrounded by a great team! More seriously, the most difficult task is maybe to give everybody the time they deserve. The human side of the job is very important. I think it's the key to success.

Arm around shoulder, tough when needed, but always fair.

The main challenge is to keep and nurture the fans, and continually improve the show. Without them we are nothing.

There's also a fantastic challenge for F1 in the years to come - the technologies we'll use in the near future absolutely need to take the environment parameter into account. The FIA are working hard on it, and I give them all my support.

The best piece of advice you've ever given a driver is...

Bring back the car on three wheels if you need to, but I want to start from pole!

Always be fair to people you work with. Those you deal with on your way to the top, you may find again if you're falling down one day.

What was you first paid job?