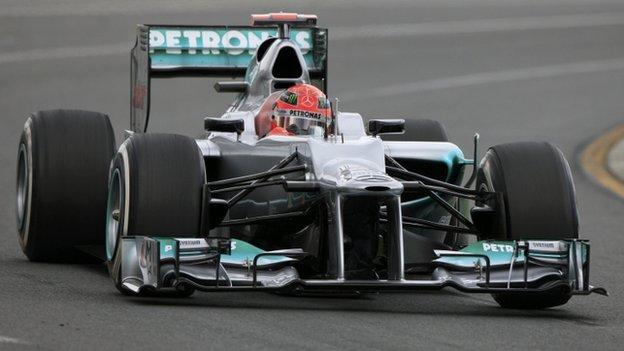 Mercedes are being accused of breaking the rules with a device that boosts their cars' straight-line speed.

They are understood to be directing air from the rear wing back along the car to the front wing, to reduce the amount of downforce it produces, cutting drag.

The system operates in conjunction with the DRS overtaking aid.

Rivals believe it contravenes a rule that prohibits drivers altering aerodynamics and are considering lodging an official protest.

The driver has to press a button in the cockpit to operate the DRS - which in the race he is able to do in specified zones if he is within a second of the car in front at specific 'detection points'.

The DRS - or drag-reduction system - operates the upper flap on the rear wing, lifting it and 'stalling' it.

On the Mercedes, when the DRS flap opens, it reveals a duct, into which the air flows before being directed back along the car and on to the front wing.

The argument has become particularly contentious because Mercedes have raised their competitiveness after two difficult seasons and are now contenders at the front.

Whiting had initially approved the system after Mercedes checked whether he thought it complied with the rules.

There were some stories earlier there were going to be some protests. I think that would be very unfortunate.

It states that with the exception of DRS, "any car system, device or procedure which uses driver involvement as a means of altering the aerodynamic characteristics of the car is prohibited".

They argue that as the driver is pressing the DRS button to activate the device, and that the device is not the specific rear-wing flap designed to be used by the DRS, then it is illegal.

McLaren team boss Martin Whitmarsh, though, said he thought it was legal. "I do, yes," he said, "because there is an exception for DRS mechanisms and I think it's part of that."

The problem is complex, because parts of the rear wing on most cars are designed to interact with and be affected by the DRS flap opening.

BBC Sport understands Whiting is to consider the matter further before delivering his final verdict.

Mercedes team boss Ross Brawn said: "Obviously we kept the FIA informed about what we were doing. They physically checked the system on Wednesday. They were completely happy about it. Other teams aren't quite so happy and are seeking clarification.

"There were some stories earlier there were going to be some protests. I think that would be very unfortunate.

"We've never done that and a protest after qualifying or after the race is not very pleasant because, of course, it can be done on Thursday or Friday when the system can be turned off. I hope it doesn't deteriorate to that."

Brawn also questioned whether some of the designs of rivals' exhausts should have been allowed by the FIA, saying they were a form of the exhaust-blown diffuser technology that was intended to be banned this year.

He said: "Probably what we've done is take the spotlight off the exhaust systems that are being run because they're nowhere near what was intended by the FIA.