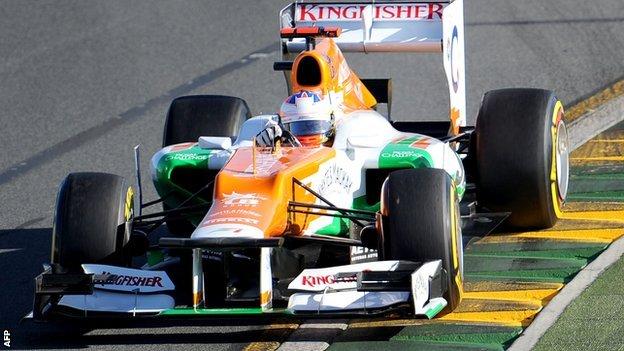 It comes as a part of the verdict in an intellectual-property dispute involving the two parties and the Caterham team.

Force India were given £20,900 over use of its intellectual property rights.

The property rights, the judge said, had been used as a "shortcut" to speed up the initial design of the 2010 Team Lotus Formula 1 car.

Mr Justice Arnold rejected Force India's claim that there had been "systematic copying" of their designs, saying they had "come nowhere near establishing that was the case".

In 2007, McLaren were stripped of their points in the constructors' championship after the outcome of the "spygate" row which centred on McLaren being in possession of a confidential 780-page technical document belonging to Ferrari. The team were also fined a record $100m (£49.2m), which included any prize and television money they would have earned from the 2007 constructors' championship.

He held that neither Caterham nor their chief technical officer Mike Gascoyne were liable for breach of confidence.

Force India has referred the case to F1's governing body the FIA and asked it to look into the use of its intellectual property by Team Lotus.

In 2009 Caterham, who were then competing as Lotus, began working with Aerolab days after the design company had decided to terminate its contract with Force India for unpaid fees.

Legal costs, which could raise Force India's bill considerably further, have not yet been established.

The ruling comes as the Kingfisher Airlines company of Force India owner Vijay Mallya is in serious financial trouble.

It announced last week that it was "curtailing" its international flights because of a shortage of airline crew.

Staff have gone on strike because of unpaid wages.

At the same time, its accounts have been frozen by authorities for non-payment of taxes, resulting in cash-flow problems for the carrier.

Kingfisher is a major sponsor of Force India. Last October the Indian Sahara Group bought a 42.5% stake in the team for £63m, with Mallya remaining as team principal.