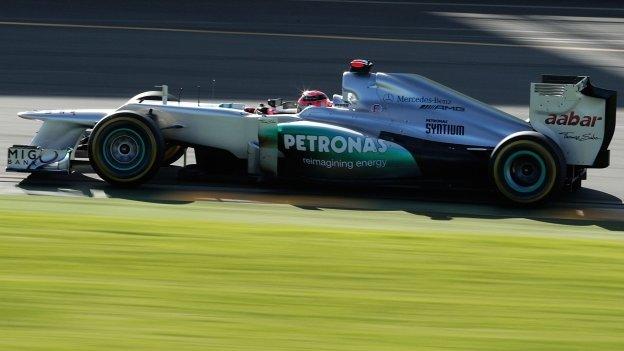 Mercedes will be able to continue to run a controversial design feature on their car after governing body the FIA said it felt it was legal.

Rivals say a system that ducts air from the rear to the front of the car to boost straight-line speed is unlawful.

The system operates in conjunction with the DRS overtaking aid, which most teams understood to be limited to operation on the rear wing.

Rivals will now have to either protest the system or build their own.

Other teams believe the Mercedes system contravenes a rule that prohibits drivers altering aerodynamics and are considering lodging an official protest.

The driver has to press a button in the cockpit to operate the DRS - which in the race he is able to do in specified zones if he is within a second of the car in front at specific 'detection points'.

The DRS - or drag-reduction system - operates the upper flap on the rear wing, lifting it and 'stalling' it.

When the DRS flap opens on the Mercedes it reveals a duct, into which the air flows before being directed back through the bodywork of the car and on to the front wing.

The argument has become particularly contentious because Mercedes have raised their competitiveness after two difficult seasons and are now contenders at the front.

The FIA has allowed the system because race director Charlie Whiting felt that it was simply an extension of the DRS and that it was impossible to draw a line saying it was not allowed.

His view is that the driver can affect the aerodynamics as long as it is only for the operation of the DRS - and that the Mercedes system is part of the DRS.

Rivals have claimed the front-wing blowing on the Mercedes constitutes a separate system, but Whiting feels that as the team are reducing drag - albeit elsewhere on the car than was originally intended by the DRS system - it should be allowed.

Other teams have further argued that because the movement of the rear wing opens a hole on the inside of the endplate, from which the air is then ducted to the front of the car, it is a separate system.

But the hole is partially open all the time, and becomes fully open when the driver operates the DRS. So Whiting said it was impossible to draw the line between the two.

There has also been controversy about an engine mode being used by Renault, who supply world champions Red Bull and Lotus - the two teams who have been most exercised by the Mercedes DRS boost.

Mercedes felt from audio analysis of the Renault engine that Red Bull were cutting more than the four cylinders allowed by the rules.

This could give an advantage in a number of areas: in fuel economy so the car can start the race lighter, gaining a performance advantage; as a form of traction control; in controlling the exhaust flow to influential aerodynamic parts at the rear of the car; and in controlling engine temperature.

But the FIA has looked at the data it has on how the Renault engine works and concluded that it is within the rules.