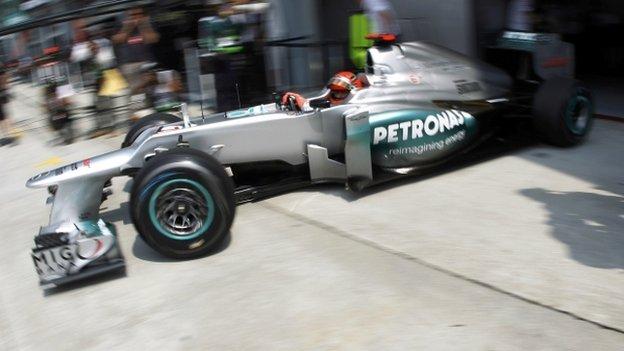 Mercedes have already attracted a lot of attention this season because of a controversial aerodynamic system on their car - and this weekend in Malaysia it could put them right up in the battle for pole position.

Sepang is one of the tracks where the system, which further boosts the effectiveness of the DRS overtaking aid, will be most advantageous in terms of one-off lap time.

However, it could also have the opposite effect in the race and be detrimental to their pace during the grand prix.

Before we get into why, we'll have to explain how the system works.

All cars have the DRS - which moves a flap on the rear wing to reduce drag and therefore increase straight-line speed.

Its use is free in practice and qualifying but is limited in the race to a specific zone on the track - in Malaysia, the main straight - and only when a driver is within a second of the car in front at a 'detection point' just before the 'DRS zone'.

On the Mercedes, the flap moves on the rear wing in the same way as on all the other cars. The difference is that when it lifts, it reveals holes on the inside of the endplates.

In Malaysia, there are fast corners where the car has enough inherent downforce to enable the driver to run with the DRS open if the set-up is right.

Normally, reducing the rear downforce in that way through a fast corner increases oversteer - which is instability at the rear of the car. That can limit how fast a driver can go through the bend.

But because the Mercedes system reduces front downforce, that means their car can maintain a consistent balance while also benefiting from the top-speed boost of the DRS.

In qualifying, that allows the Mercedes drivers to travel a much greater distance on a given lap with the DRS open. Which should give them a reasonable percentage of lap-time gain - and therefore a substantial advantage.

But in the race it is a different matter.

For a start, DRS use is limited to the main straight, so the advantage gained in fast corners and on other straights in qualifying is no longer there.

On top of that, a specific characteristic of the system could hurt Mercedes's chances.

When the DRS closes, because there is a volume of air in the system, the rear downforce comes back on to the car quicker than the front downforce.

It might only be a 10th of a second or so - but it does mean the rear of the car is stable earlier. That's a good thing for braking stability.

But in the race the system will only be used rarely and therefore the aerodynamic characteristics of the car on corner entry will be quite different - and use the rear tyres more aggressively because the rear will be moving around more.

So I can see the system allowing them to knock on the door of pole position in qualifying - but hurting the rear tyres in the race.

That is exactly the problem Mercedes had in Australia last weekend.